As discussed in previous articles, Frame specs are divided into up to four “blocks”, the first of which is the interface block.

The interface block implementation in the target language consists of the public methods for the object which are responsible for creating and initializing a FrameEvent object, sending it to the internal state machine and then returning a response, if any, to the caller. Let us start by taking a look at the structure of a FrameEvent and then discover how it is used in the interface.

The diagram below shows a model Frame spec and it’s four blocks, illustrating how the interface is the gateway for information and activity into the system. Here we can see how calls to the interface methods are marshaled into a FrameEvent and sent into the state machine to drive activity: 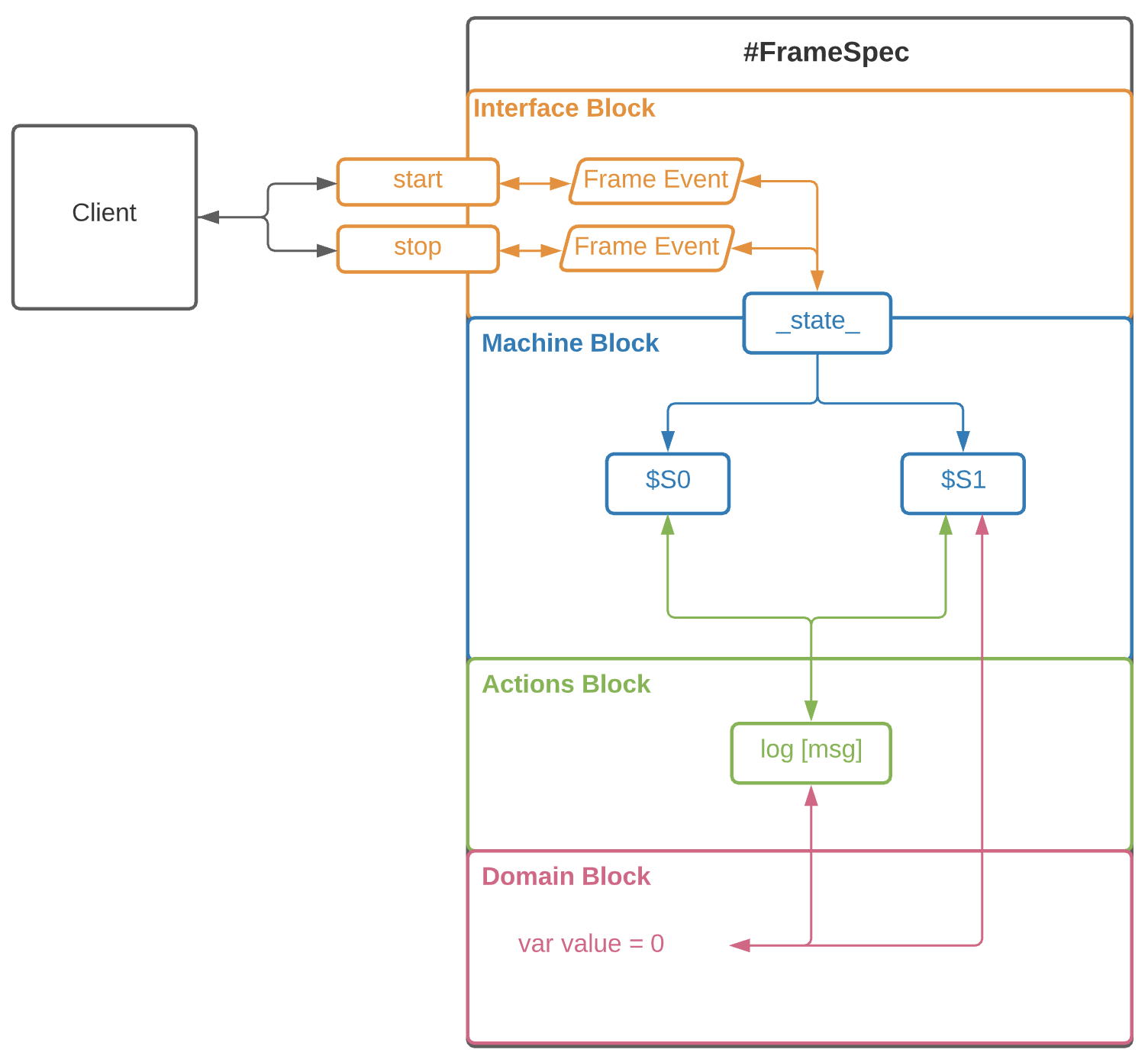 To see this architecture in detail, we will explore the inner workings of the following Frame spec:

Let us now take a look at a FrameEvent class definition to understand how it serves as the information transport mechanism for the system and the stimulus for system behavior.

Frame Events are essential to the notation and the implementation of Frame system controllers. Frame notation has syntax for manipulating FrameEvents and assumes three mandatory fields exist:

Here is a basic implementation of the FrameEvent class:

The message, by default, is the name of the interface method called and the parameters are the - well - parameters. The return object, if there is one, is created by the behavior of the state machine while processing the FrameEvent and will hold the data to be returned back to the client.

Frame notation uses the @ symbol to identify a FrameEvent. Each of the three FrameEvent attributes has its own accessor symbol as well:

In this article we will only use the last accessor for the return value. This expression notation can be interpreted as “set the return value on the current event being handled and return”. It would also be possible to use the equivalent syntax:

Interface methods have the following syntax:

As we can see, interface declarations have four parts, the last three being optional:

The #InterfaceSpec system only has a single interface method - yell - with the following attributes:

Most of this syntax is self explanatory, however a few nuances are worthy of discussion for each part.

Below we see the code that is generated by the yell declaration:

All interface method implementations follow the same pattern we see above:

This completes our examination of the Frame syntax and implementation of interface methods. However it is instructive to understand how the FrameEvent created by the interface is used, which we will now show.

The FrameEvent and Event Handlers

The yell interface method creates a new FrameEvent and adds its parameters to it, as well as changes the default message |yell| to |whisper|.

In the $Echo state, we can see there is an event handler that selects for the |whisper| message and takes the correct parameters:

The event handler does one thing - it calls the toLowerCase(msg) action with the message that was sent and returns it, presumably after transforming it to lower case in an appropriate way for the target language.

Although there are many different ways to implement automata, Frame’s highly opinionated choice to make FrameEvents a first-class aspect of the implementation enables much of the simplicity and power of the language.

Here is a working example of the #InterfaceSpec system showing all the aspects we have discussed.

In the last installment of our conversation with the World, the denouement concludes with a demonstration of how to implement a key feature of Statecharts called hierarchical state machines and the...

Getting Started With Frame